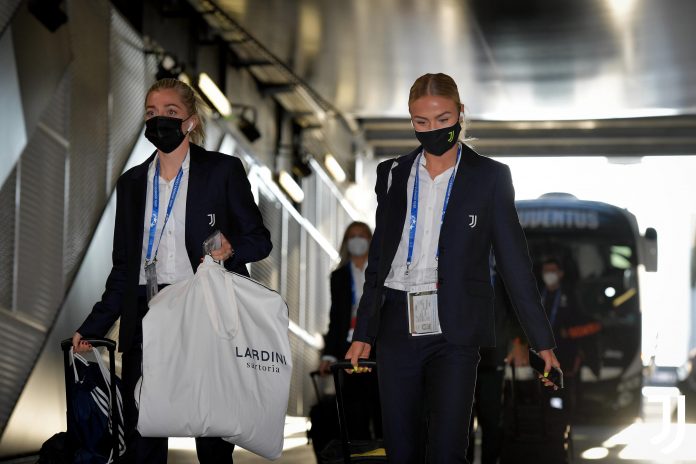 Juventus surprise Lyon in the 1st leg after a dramatic comeback in the second half. Catarina Macario scored for Lyon’s lead but after Ellie Carpenter’s red card Cristiana Girelli and Agnese Bonfantini secured that the win stay at home.

Right at the beginning, Juventus already had a chance to go in front. Lyon’s goalkeeper, Sarah Bouhaddi, poorly cleared the ball and hit her teammate. The ball deflected to Lina Hurtig who was completely alone in front of Bouhaddi but sent the ball just wide. Lyon punished Bianconere for the missed opportunity in the 8th minute. Selma Bacha sent a floating cross to the edge of the goal area, Catarina Macario jumped the highest and headed the ball into the far corner for the 0-1 lead. Lyon almost doubled it in the 35th minute. Melvine Malard avoided the offside trap, sent the ball past Pauline Peyraud-Magnin, but Cristiana Girelli managed to clear the ball off the line. The guests managed to get the second goal in the 43rd minute but Malard was in clear offside position, thus the score at the half-time stayed 0-1.

Lyon continued in the second half with more possession and not enabling Juventus to create any chances. In the 62nd minute, Ellie Carpenter waited too long to get rid of the ball. Lisa Boattin took it from her and Carpenter pulled her down just over the centre line. Since she was the last defender, Cheryl Foster showed her a direct red card for denying the goal scoring opportunity. Bianconere got their momentum going and almost got an equalizer a minute later, when Valentina Cernoia’s curled shot from inside the area hit the woodwork. After the red card, Juventus completely took over and finally got their goal in the 71st minute. Matilde Lundorf ran down the right side, sent a cross in the middle, where Bouhaddi already caught the ball but dropped it. Cristiana Girelli didn’t have a hard task, sending the ball into the net. VAR confirmed the goal, despite there will be some polemic if the ball went over the line before Lundorf’s cross. Juve completed their comeback in the 83rd minute, when a substitute, Agnese Bonfantini, converted a brilliant pass from Arianna Caruso. Bonfantini had another promising chance just minutes after, but this time Bouhaddi saved her shot. After 7 minutes of extra time, Juventus could start celebrating one of the biggest victories in the club’s history.

Carpenter’s red card was a key moment of the game. After that, Juventus took initiative and managed to come back. But there are 90 minutes left, and Lyon will for sure try to do everything to overturn the deficit.